Look at this jsPerf test case.

Now back to me.

Now back at another revision of the same test case.

Now back to me.

Is it confusion that I see in your eyes?

To keep this story short I will assume that you read my other posts about V8’s internals (at least this, this, this and this ) and have an idea about how inline caches, hidden classes and closures work in V8, how jsPerf benchmarks your code by generating a function from your test case code and why microbenchmarks are bad.

We start by throwing together a simple standalone test case that can be run in the d8 shell:

The test case runs just fine and reports low variance which indicates that there is no problem with optimization being disabled for functions collecting timing samples:

What in the name of adaptive compilation is going on here? Did not everyone including me tell before that it is better to use classical prototype pattern as this is what VM optimize for?

Actually I lied when I said that I was not expecting to see a polymorphic check at all. In fact previously, before John-David Dalton fixed mangling scheme used by Benchmark.js I was constantly seeing highly polymorphic test cases poping up.

To understand how interaction between jsPerf and V8 hidden classes can lead to a polymorphic code lets briefly remember a couple of things. 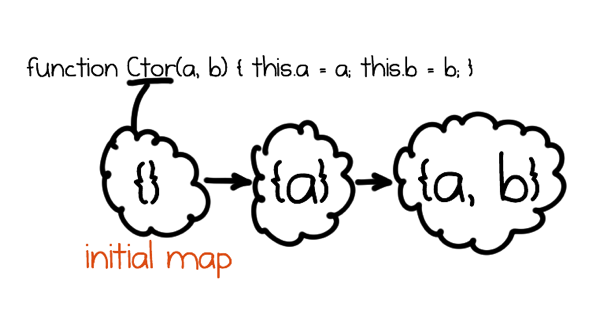 V8 uses hidden classes (called maps internally) to capture object structure as it’s shape is being mutated. Each hidden class fully describes object’s layout and contains additional information about it e.g. it points to object’s prototype. Object’s hidden class changes as new properties are being added to it. Individual hidden classes describing shapes that object went through are wired together with transitions so that runtime system could find them if some other object arrives to the same shape. This chain (or rather dag) of transitions usually starts at object’s constructor which carries around so called initial map. Different constructors carry different initial maps.

Important thing to understand from this is that the code below will produce objects with different hidden classes because their constructors are different closures. 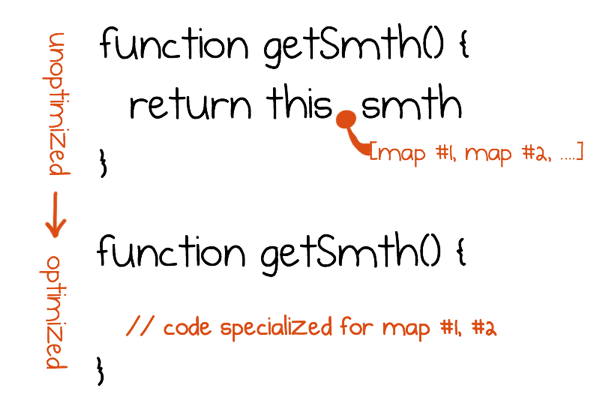 V8 has two separate compilers: a simple non-optimizing one (aka full) and an optimizing one. When code is compiled with a full compiler all operations with dynamic binding like property lookups get an inline cache (aka IC) that remembers what kind of objects it saw and adopts to them to ensure that the next time this IC sees the same kind of object it can perform operation quickly instead of figuring out what to do again. One thing to note here is that unoptimized code is shared by all instances of the same function literal which means that ICs and information collected by them is shared as well.

When the code becomes hot it gets recompiled with optimizing compiler that takes information collected by ICs and uses it to speculatively specialize code to handle only types that ICs saw. Specialization is guarded with checks that verify assumptions made optimizing compiler. After specialization compiler applies classical techniques (CSE, LICM and so on), which make code even faster by eliminating different redundancies: for example repetitive guards inserted on earlier stages or repetitive loads from the property that does not change.

To execute your test case Benchmark.js compiles it into a JavaScript code that looks approximately like this (I am intentionally writing certain things differently to highlight important parts):

In fact it generates multiple copies of this code each mangled using a unique identifier to prevent underlying JavaScript VM from caching optimized version. Each copy is used to obtain a single timing sample for a test case. As can be seen above Benchmark.js sampled 67 runs of Closure case which means it compiled 67 uniquely mangled versions of benchmarking function. However each of those functions was run not once but twice.

Before running generated function with a big number of iterations N Benchmark.js pretests it by executing it with N = 1.

Now the source of polymorphism is apparent: by executing benchmarking function twice, we executed setup section twice which each time produced objects with different hidden classes. Essentially hidden classes from pretest have flown into ICs and “polluted” them.

Update 10 September 2013 Pretest related observations apply to an older version of Benchmark.js and this behavior should no longer be reproducible on jsPerf as John-David Dalton pushed changes which ensure that each compiled benchmarking function is executed just once.

Wait! Why do we have both poly- and mono- checks?

The truth is some ICs (for property loads and calls) do not record the type of the very first object they see. When such IC is used for the first time it flips to a so called premonomorphic state and does not record the type it saw, only the next observed object will be recorded. Other ICs (for example ones used for stores) do not have premonomorphic state and start recording types immediately.

For our benchmark it means that pretest run transitions all load and call ICs into premonomorphic state while a store IC in PrototypeColor.prototype.setName becomes monomorphic. The benchmarking function is run the second time load and call ICs become monomorphic, but the store IC becomes polymorphic because it saw two distinct hidden classes. On the other hand ClosureColor.prototype.setName does not contain a store IC at all because context variable access in the absence of eval is not dynamically bound and is statically resolved by scope analysis even before optimizing compilation.

Here is an excerpt from the log generated by debug build of d8 with --trace-ic flag.

Why inserted checks are not hoisted?

This is a more interest question. V8 has a loop invariant code motion pass. Checks are obviously invariant, as nothing changes object’s hidden classes in this loop. Why didn’t LICM move them out?

After spending some time with debug printf’s I managed to figure out that this is a bug in the interaction between on-stack-replacement, graph building and LICM:

If I rewrite setup section to work around this bug by obstructing the control flow:

then all checks (including a polymorphic one in the Prototype case) are hoisted from both loops leaving only stores and loads inside and as the result performance of both becomes the same:

In the real world it is unlikely that application would create ClosureColor and PrototypeColor again and again. In most cases they will be created once and used to produce multiple objects.

What just happened here? Nothing good. V8 usually tries to represent properties containing functions in a special way: put actual function values as constant functions on the hidden class. This allows them to perform as fast as methods in a more static language would. However right now this only works if you assign the very same function to the same property when producing a new object. ClosureColor assigns new closure each time which breaks V8’s approach. A bit more detailed explanation is available in my other post on closures.

I would like to conclude by beating microbenchmarking horse again.

It is hard to write meaningful microbenchmarks.

It is even harder to interpret their results.

Please don’t do it.

This benchmark might look like it is comparing different class emulation approaches, but we saw that it does not and ultimately several months in the future it might simply become an empty loop benchmark once JavaScript VMs implement some sort of scalar replacement of aggregates

In fact allocation sinking is not the only way compiler could render this microbenchmark useless. It could, for example, apply loop peeling: take first iteration out of the loop and start loop on the second iteration. Peeling would turn benchmarking code into something like this (after inlining):

Then compiler would follow with a round of store-to-load forwarding and redundant store elimination making the loop empty, as it can easily prove that prototypeColor._name contains 'blue' at the very start of the loop.