I have a thing for virtual machines that are implemented in the language (or a subset of the language) they are built to execute. If I were in the academia or just had a little bit more free time I would definitely start working on a JavaScript VM written in JavaScript. Actually this would not be a unique project for JavaScript because people from Université de Montréal kinda got there first with Tachyon, but I have some ideas I would like to pursue myself.

I however have another dream closely connected to (meta)circular virtual machines. I want to help JavaScript developers understand how JS engines work. I think understanding the tools you are wielding is of uttermost importance in our trade. The more people would stop seeing JS VM as a mysterious black box that converts JavaScript source into some zeros-and-ones the better.

I should say that I am not alone in my desire to explain how things work internally and help people write a more performant code. A lot of people from all over the world are trying to do the same. But there is I think a problem that prevents this knowledge from being absorbed efficiently by developers. We are trying to convey our knowledge in the wrong form. I am guilty of this myself:

I have been thinking about these problems for quite some time and I decided that it might be worth to try explaining JavaScript VM in JavaScript. The talk "V8 Inside Out" that I've given at WebRebels 2012 pursues exactly this idea [video] [slides] and in this post I would like to revisit things I've been talking about in Oslo but now without any audible obstructions (I like to believe that my way of writing is much less funky than my way of speaking ☺).

Imagine that you want to implement in JavaScript a VM for a language that is very similar to JavaScript in terms semantics but has a much simpler object model: instead of JS objects it has tables mapping keys of any type to values. For simplicity lets just think about Lua, which is actually both very similar to JavaScript and very different as a language. My favorite "make array of points and then compute vector sum" example would look approximately like this:

Note that I have a habit of checking at least some final results computed by my μbenchmark. This saves me from embarrassment when somebody discovers that my revolutionary jsperf test-cases are nothing but my own bugs.

If you take the code above and put it into Lua interpreter you will get something like this:

Good, but does not help to understand how VMs work. So lets think how it could look like if we had quasi-Lua VM written in JavaScript. "Quasi" because I don't want to implement full Lua semantics, I prefer to focus only on the objects are tables aspect of it. Naïve compiler could translate our code down to JavaScript like this:

However if you just try to run translated code with d8 (V8's standalone shell) it will politely refuse:

The reason for this refusal is simple: we are still missing runtime system code which is actually responsible for implementing object model and semantics of loads and stores. It might seem obvious, but I want to highlight this: VM, that looks like a single black box from the outside, on the inside is actually an orchestra of boxes playing together to deliver best possible performance. There are compilers, runtime routines, object model, garbage collector, etc. Fortunately our language and example are very simple so our runtime system is only couple dozen lines large:

Notice that I have to use Harmony Map instead of normal JavaScript Object because potentially table can contain any key, not just string ones. 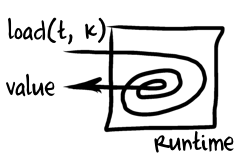 Now our translated code works but is disappointingly slow because of all those levels of abstraction every load and store have to cross before they get to the value. Lets try to reduce this overhead by applying the very same fundamental optimization that most JavaScript VMs apply these days: inline caching. Even JS VMs written in Java will eventually use it because invokedynamic is essentially a structural inline cache exposed at bytecode level. Inline caching (usually abbreviated as IC in V8 sources) is actually a very old technique developed roughly 30 years ago for Smalltalk VMs. 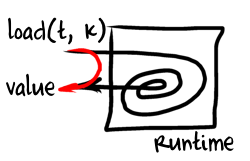 The idea behind inline caching is very simple: we want to create a bypass or fast path that would allow us to quickly, without entering runtime system, load object's property if our assumptions about object and it's properties are correct. It's quite hard to formulate any meaningful assumptions about object layout in a program written in language full of dynamic typing, late binding and other quirks like eval so instead we want to let our loads/stores observe&learn: once they see some object they can adapt themselves in a way that makes subsequent loads from similarly structured objects faster.  In a sense we are going to cache knowledge about the layout of the previously seen object inside the load/store itself hence the name inline caching. ICs can be actually applied to virtually any operation with a dynamic behavior as long as you can figure out a meaningful fast path: arithmetical operators, calls to free functions, calls to methods, etc. Some ICs can also cache more than a single fast path that is become polymorphic.

If we start thinking how to apply ICs to the translated code above it soon becomes obvious that we need to change our object model. There is no way we can do a fast load from a Map, we always have to go through get method. [If we could peak into raw hashtable behind Map we could make IC work for us even without new object layout by caching bucket index.] 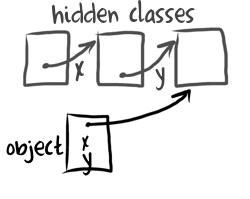 For efficiency tables that are used like structured data should become more like C structs: a sequence of named fields at fixed offsets. The same about tables that are used as arrays: we want numeric properties to be stored in array like fashion. But it's obvious that not every table fits such representation: some are actually used as tables, either contain non-string non-number keys or contain too many string named properties that come and disappear as table is mutated. Unfortunately we can't perform any kind of expensive type inference, instead we have to discover a structure behind each and every table while the program runs creating and mutating them. Fortunately there is a well known technique that allows to do precisely that ☺. This technique is known as hidden classes.

The idea behind hidden classes boils down to two simple things:

Hidden classes have a very important feature: they allow VM to quickly check assumptions about object layout by doing a simple comparison against a cached hidden class. This is exactly what we need for our inline caches. Lets implement some simple hidden classes system for our quasi-Lua runtime. Every hidden class is essentially a collection of property descriptors, where each descriptor is either a real property or a transition that points from a class that does not have some property to a class that has this property:

[I am not going to explain every line of the code because it's commented JavaScript; not C++ or assembly... This is the whole point of using JavaScript. However you can ask anything unclear in comments or by dropping me a mail]

Now that we have hidden classes in our runtime system that would allow us to perform quick checks of object layout and quick loads of properties by their index we just have to implement inline caches themselves. This requires some additional functionality both in compiler and runtime system (remember how I was talking about cooperation between different parts of VM?).

One of many ways to implement an inline cache is to split it into two pieces: modifiable call site in the generated code and a set of stubs (small pieces of generated native code) that can be called from that call site. It is essential that stubs themselves (or runtime system) could find callsite from which they were called: stubs contain only fast paths compiled under certain assumptions, if those assumptions do not apply for an object that stub sees then it can initiate modification (patching) of the call site that invoked this stub to adapt that site for new circumstances. Our pure JavaScript ICs will also consist of two parts:

In the native code V8 finds IC sites to patch by inspecting return address sitting on the stack. We can't do anything like that in the pure JavaScript (arguments.caller is not fine-grained enough) so we'll just pass IC's id into IC stub explicitly. Here is how IC-ified code will look like:

Changes above are again self-explanatory: every property load/store site got it's own IC with an id. One small last step left: to implement MISS stubs and stub "compiler" that would produce specialized stubs:

It's a lot of code (and comments) but it should be simple to understand given all explanations above: ICs observe and stub compiler/factory produces adapted-specialized stubs [attentive reader can even notice that I could have initialized all keyed store ICs with fast loads from the very start or that it gets stuck in fast state once it enters it].

If we throw all the code we got together and rerun our "benchmark" we'll get very pleasing results:

This is a factor of 6 speedup compared to our first naïve attempt!

There is never a conclusion to JavaScript VMs optimizations

Hopefully you are reading this part because you have read everything above... I tried to look from a different perspective, that of a JavaScript developer, onto some ideas powering JavaScript engines these days. The more code I was writing the more it felt like a story about blind men and an elephant. Just to give you a feeling of looking into the abyss: V8 has 10 descriptors kinds, 5 elements kinds (+ 9 external elements kinds), ic.cc that contains most of IC state selection logic is more that 2500 LOC and ICs in V8 have more than 2 states (there are uninitialized, premonomorphic, monomorphic, polymorphic, generic states not mentioning special states for keyed load/stores ICs or completely different hierarchy of states for arithmetic ICs), ia32-specific hand written IC stubs take more than 5000 LOC, etc. These numbers only grow as time passes and V8 learns to distinguish&adapt to more and more object layouts. And I am not even touching object model itself (objects.cc 13kLOC), or garbage collector, or optimizing compiler.

Nevertheless I am sure that fundamentals will not change in the foreseeable future and when they do it will be a breakthrough with a loud bang! sound, so you'll notice. Thus I think that this exercise of trying to understand fundamentals by (re)writing them in JavaScript is very-very-very important.

I hope tomorrow or maybe the week after you will stop and shout Eureka! and tell your coworkers why conditionally adding properties to an object in one place of the code can affect performance of some other distant hot loop touching these objects. Because hidden classes, you know, they change!