The trap of the performance sweet spot

[If you have arrived here from a blog post discussing asm.js please read my own opinion about asm.js]

Disclaimer: This is my personal blog. The views expressed on this page are mine alone and not those of my employer.

A story of a C programmer writing JavaScript

Mr. C. is a C programmer as you can probably guess from his name. Today he was asked by his boss to write a very simple function: given an array of numbered 2d points calculate vector sum of all even numbered points... He opens his favorite text editor and quickly types something like (I'll be intentionally skipping some #include boilerplate):

Oh, that was pretty easy... There are still some time left, so mr. C. throws in some array creation and benchmarking code:

His code seems to compile and run just fine:

Suddenly mr. C gets a call from his boss. "We've decided to rewrite our apps in JavaScript. It is pretty fast nowdays, ya know." says the boss and hangs up. Mr. C. does not like JavaScript as much as he likes C but he is one of those programmers who can write programs in any language:

That was very easy, but the numbers don't look as impressive as mr. C. or his boss expected:

If C is a stone then JavaScript is a fog

C is a low-level programming language. People call it a portable assembly sometimes. You just take a piece of memory and say: hey, this smallish sequence of 24 bytes is actually a Point which has one uint32_t field followed by two double fields.

Small chunk of unused memory between n and x appears to make x and y fields nicely aligned. CPUs ♥ aligned doubles. On some architectures you can't even read an unaligned one directly from memory into a floating point register (you'll get punished if you try).

Arrays in C are also nice and tight: you just take a bigger region of memory and assume that it contains a sequence of Points one after another.

But in JavaScript things are destined to get hairy. You can't take a flat piece of memory and call it Point with this and that as fields. Instead you have an extremely flexible thing called Object. Object can have properties which can come and go as they wish (almost). You can write constructor:

but nothing actually prevents you from modifying Point instances after they were created. VM that runs JavaScript has to be always ready for virtually anything that can happen with your object (new properties added, old properties deleted, property descriptor modified). Because of this flexibility it can't pack Point objects into 24 bytes and has to go with something like this (example layout used by V8): 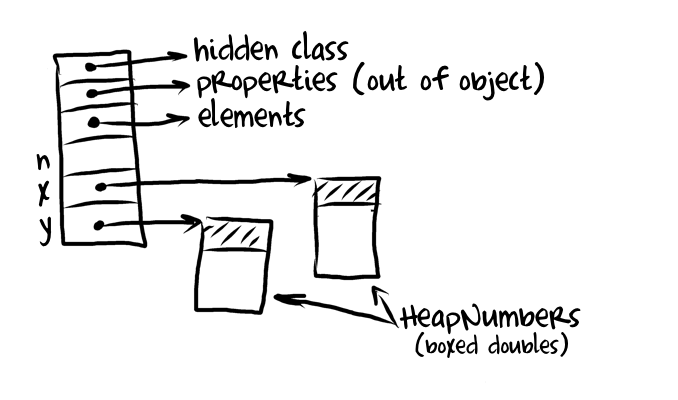 V8 actually tries to make the object more struct like. It attempts to figure out how much space should be preallocated directly inside the object for properties by looking at the constructor and/or doing allocation profiling. Some VMs just use a fixed constant or even store all properties outside of an object in a separate array. Another thing to notice is that V8 always boxes numbers that are not 31-bit integers (32-bit on x64). Some VMs (e.g. SpiderMonkey and JSC) don't box doubles but instead use NaN-tagging instead.

Nevertheless Point object will be 3.3 times as big on x64 version of V8 than it was in C program and it will not be continuously allocated in memory (doubles are accessed via indirection). There are three additional fields: pointer to hidden class (known as Map in V8, Shape in SpiderMonkey, Structure in JavaScriptCore) which captures and describes layout of the object, pointer to out of object properties backing store and pointer to elements backing store. All these fields are required because object can be mutated in an unpredictable ways after it's creation.

The mathematics of performance is simple: each point of flexibility and each indirection (arrow on the picture) adds additional runtime cost. Evaluating simply looking expression points[i].x in JavaScript requires answering to an expensive questions: "What is points? How do I get property called i from it? How then I get x?". Fully statical analysis of the program is too expensive to be used to answer these questions. Instead modern JITs reduce these costs by adapting generated code to the program while it runs via techniques like inline caching and adaptive compilation pipelines. Simply speaking: because in JavaScript an application can't tell compiler "points is an array of Point objects" via types declarations JIT has to eavesdrop to notice that.

If you want to get good performance you need to speak loud enough for JIT compiler to hear you and adapt to your application. This means: your objects should have stable layouts, property access and call sites better be monomorphic, no funny language features (e.g. with or eval) in sight, using typed arrays where appropriate instead of pure JS arrays etc. In a sense you'll be writing statically typed code in a language that does not support static typing.

"Wait a second!"  somebody might say here "Mr. C's code above is pretty damn type stable and yada-yada. But it's still 10x times slower! Can he make it faster?"

Yes, he can but he will have to

Write JavaScript as if it's assembly generated by C compiler

To get as close as possible to raw memory from JavaScript we have to use WebGL typed arrays. It's easy for a JIT to befriend those guys and optimize the hell out of reads and writes, because they have a nice semantics for their backing stores: no nasty holes leading to prototype lookups, all elements have known primitive type and no boxing is required.

This is a very naïve implementation (I would even say parody) of the famous malloc&free duo. It does not try to optimize memory usage at all but it is perfect for our demonstration.

Original C program returns sum on the stack so will have our toy stack to mimic that.

Creating array of points is simple: you malloc an array and fill it. It might be hard to read this code and see how it relates to the first JavaScript version or even to the original C function but that's because it actually tries to mimic one of the optimizations every good C compiler tries to do: strength reduction. Calculating points[i] as (byte*)points + sizeof(Point) * i might be wasteful because multiplication is expensive compared to addition so good C compiler will try to replace points[i] with a new artificial induction variable p' that starts as p' = points[i] and is advanced as p += sizeof(Point).

Summing loop was translated from C in the same way as initialization loop in createArrayOfPoints but there is another important classical optimization demonstrated here: scalar replacement. Smart compiler sees (via escape analysis usually) that Point sum does not have to exist as a continuos entity on the stack. Instead it can be exploded and its fields becomes separate variables (register allocator later puts them into registers). Result of the sumArrayOfPoints is returned on the "stack" just like in the original C version.

The rest of code is unchanged but minor changes are required in the testArrayOfPoints function:

We have to take care of managing stack space for stack allocated sum object and we should remember to free allocated array of points. We are using JavaScript as assembly after all...

As you can see in exchange for completely unreadable JavaScript code we got a nice 9x speedup on creation and 2x speedup on sum calculation.

If you are curious enough to look at the code V8 generates for the sum loop and compare it with code generated from C by GCC you will notice that while it is pretty tight V8 does not understand that i32 and f64 are actually the same array and treats them separately. There are also bounds checks that are not there for C code.

Don't be charmed by the sweet spot

Roughly a week ago a friend of mine sent me a link to Broadway.js accompanied by numerous expletives to better convey his excitement with this project and emscripten in general: "Look how mighty fast JavaScript became, old chap!".

My friend has fallen into the logical trap without even noticing it. Good performance demonstrated by some inhumanly written piece of code (e.g. translated from C via optimizing compiler) does not prove that "JavaScript is already fast enough" unless you are planning on writing your webapps in C for the rest of your life or you are capable of writing such inhuman code yourself just like mr. C. Instead it proves that "Certain features of JavaScript when used in certain way lead to good enough performance." Efficiency on a tight computational kernel does not necessarily translate into efficiency on different workloads. I call this the trap of the sweet spot.

It's not JavaScript that becomes faster and faster. It's JavaScript's sweet spot.

You can hit the sweet spot, no doubt about that. But you have to follow rules to hit it. And those rules are strict (application runs best when it's actually pretty static in it's behavior) and sometimes unknown (different VMs rely on different heuristics). And hitting the sweetest part requires some strange engineering decisions as demonstrated by the mr. C.'s example above.

Real world performance is not as shallow as some micro-benchmark score. It has at least three very important facets: speed, memory, VM's complexity.

If you look at existing JavaScript VMs you will notice that they have to pay a lot in terms of complexity to overcome ineffective execution or memory utilization. And implementation complexity is the worst kind of complexity in the world: it leads to subtle bugs that occur on 0.000001% of programs, it leads to unpredictable and hard to analyze performance, it leads to volumes of rulebooks that specify how to appease the compiler.

JavaScript is a complex and expensive language in it's very core. Keep that in mind and don't be charmed by the sweet spot.

But I must admit: working on a JavaScript VM and making sweet spot larger and easier to hit is an interesting challenge that make one burst with excitement and stresses the brain. :-)